Due to a lovely January snow storm I got to try two new things this week. One planned (making candles) and one unplanned (making snow cream). I’ll still do a new thing for all 52 weeks, I just consider the snow cream a delicious bonus.

Candle Making
This weekend I went to a 3-hour candle making workshop. I know that doesn’t sound very thrilling, but it’s too cold for outdoor fun. I promise more exciting things are coming. The workshop was held at Marble Springs Farmstead, the home of John Sevier. I am not from Tennessee so I don’t know much about its history. From what I’ve learned about our first governor, he was actually born in Virginia (my home state), he is buried at the courthouse next to where I work (it is a bit weird that I didn’t know that), and he almost got into a duel with Andrew Jackson (which doesn’t seem like the smartest thing to do because Andrew Jackson was a crazy person). Moving on.

The workshop took place in the property’s 18th century style tavern and focused on the lighting techniques of the period. 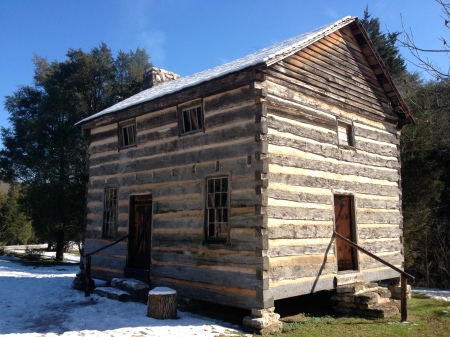 Of course, 200+ years ago there was no central heating or electricity so it was like hanging out in an icebox for 3 hours. There was a fire, but it was still colder inside than it was outside (around 30 degrees when we got there). I really can’t imagine what it was like to live back then. They experienced a mini ice age in the 1770s, so I’d imagine it was especially cold on the frontier.

The fire wasn’t just to keep us warm, it was used to melt the wax for the candles. 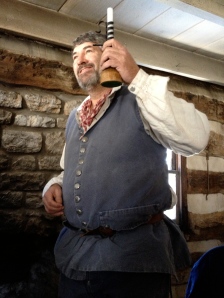 The workshop was a lot of fun and very informative. It definitely appealed to my inner nerd. For example, we learned about ‘courting candles.’  Courting candles were used as a timer for how long a suitor could spend with a young lady. (It was at this time the gentleman giving the workshop pointed out that I would be considered a spinster because I was over 18 and unmarried. Thanks dude.) The father could adjust the candle’s height based on how much he liked the suitor.

I hoped to take a tour of the grounds while I was there, but after a week of rain and melting snow it was a little too muddy. Marble Springs has tons of other educational activities like soap making and stargazing so I am sure I will be back there soon. But maybe I’ll wait until it is a bit warmer.

Special thanks to my friend Erin for coming and hanging out with me in the cold and helping with pictures.

Snow Cream
It snowed this week in Knoxville!  The first real snow of the season. We got about 3-4 inches which essentially shut down the city. But, I got a day and a half off from work so I am not complaining. Here is the view of the garden from my bedroom window:

I’d never heard of snow cream before I moved to Tennessee. In fact, I don’t think I’d heard of it before I moved to Knoxville. Instead, we always made snow cones when I was a kid. It’s the same concept, just with Kool-Aid and without the cream.

After lounging and enjoying my snow day at home, I finally made it outside to collect some snow. It has been a while since we had any sort of substantial snowfall (anything more than flurries here is considered substantial), so it was nice to hear the ice crunching beneath my boots again. The recipe is really easy, just milk or cream, sugar, vanilla, and snow. Essentially, what I made two weeks ago to go with the pie, but colder.

Pro tip: If you stop to take a bunch of photos of your creation it will start to melt before you can eat it.

The snow cream was pretty tasty and a fun winter treat. I see why everyone likes it so much. I will note that if you freeze it to eat later and then try to scoop it out of the bowl, there is a good chance the rock solid block of snow cream will end up on the floor. Or, it could just be that I am uniquely talented.