As part of my New Years trip to Breckenridge I decided to try my hand at skiing. It is something that I have wanted to do for a long time, but living in the South does not afford a lot of opportunities to hit the powder.

I had never taken part in any winter sports prior to this trip (if you don’t count sledding down my front yard after snowstorms). I knew that if I was going to hit the slopes I would have to take a lesson. Me, on skis, without any training, would be a menace to everyone on the mountain. 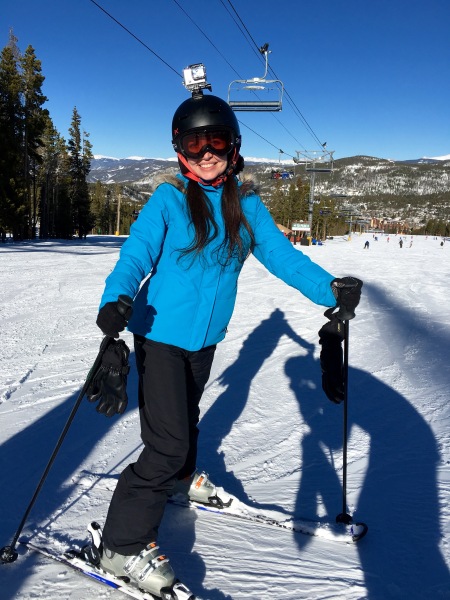 My friend Jill and I took a lesson for first timers in order to learn the basics. The first half of the day was designed to get us acquainted with the fundamentals.  We started by skiing in a circle on one ski, sidestepping up and down a hill, and then wedging down a hill. All of this, fortunately, was in a designated ski lesson area. This was wise, because while I was doing well with skiing, I was not doing so hot with stopping.

Somehow after lunch, and with a few extra tips from my instructor, I managed to get a better hold on slowing myself and eventually stopping. When we returned from our break, five of the eight members in our class decided not to return. Apparently, they determined skiing was not for them. That was sad for them, but awesome for the three of us who remained. We basically got a semi-private lesson for the rest of the day. In the afternoon our awesome instructor took us up the QuickSilver SuperChair life to Ten Mile Station.

I felt like I had a better handle on the skis in the afternoon than in the morning. We practiced our turns going down the slope so I was able to build up a little speed and confidence. I really liked being able to break away from the group and have a little space to practice. I managed to finish my day with no major incidents or broken bones.

The next day I met up with my friends Lilas and Chris, who just happened to be in Breckenridge at the same time. Luckily, I mentioned my visit in a previous post which Lilas read while sitting in the Denver airport.

We started on the same runs I tried the day before, but took a few different routes down—a few of which were much more complicated than what I did the day before and included icy wooded paths and sharp hills. We also took the A-Chair higher up Peak 9 where I learned that all green trails were not created equal. I actually spent a good part of my day on my back with a lovely view of the sky.

But overall I had an absolute blast, falls and all. At the end of the day I decided to take one more pass down the mountain. Mainly because the easiest way to get to the ski shop was to ride the lift back up and ski down. Somehow I managed to make it the entire way without incident and I actually had my GoPro recording.

Here is my video of my first time skiing all the way down alone without falling. Yes, I am going slower than almost everybody, but I am pretty sure everyone else had been skiing a lot longer than one day.

I can’t wait to go skiing again. I will definitely take another lesson (or two) next time to give me a refresher and help me develop my skills. Unfortunately, unless the resorts get a lot closer to home, it may have to wait until next season.