Some people bring nothing but joy, bliss, and positivity to your life. For me, two of those people are my friends Justin and Samsara, who I met during my stay in a Dominican Republic tree house village. I was lucky enough to reconnect with both of them on a recent trip to LA, despite the fact that neither of them actually live in Los Angeles. 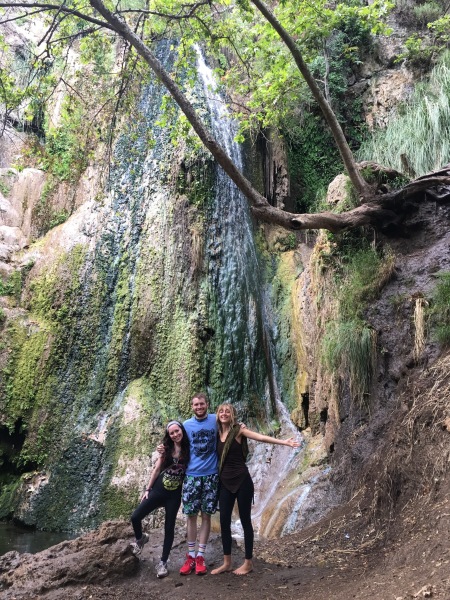 As one of our many adventures, and to offset all the food we gorged ourselves on over the weekend, we decided to go for a hike in the mountains of Malibu. Specifically, Justin took us all to Escondido Canyon Trail and Waterfalls.

This is also known as the “three waterfall hike” because you can hike to all three tiers of Escondido Falls. The Escondido Falls are the highest in the Santa Monica Mountains, and the tiers are 50 feet, 25 feet, and 150 feet, respectively.

The actual hiking portion was simple enough, and stretched 4.2 miles past Malibu mansions and through beautiful flora. I usually hike 10-12 miles every weekend so I thought this would be a leisurely afternoon. But I should have known that a day with Justin and Samsara would be filled with adventure. 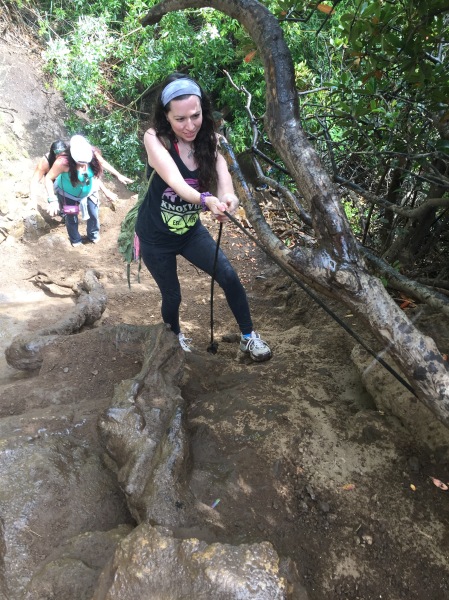 The first part of the hike is easy. Just a general stroll through the wild flowers, across riparian canyon terrain, and over several creek crossings that required careful stepping over logs and rocks. But that just led us to the first waterfall. After that, things got interesting. 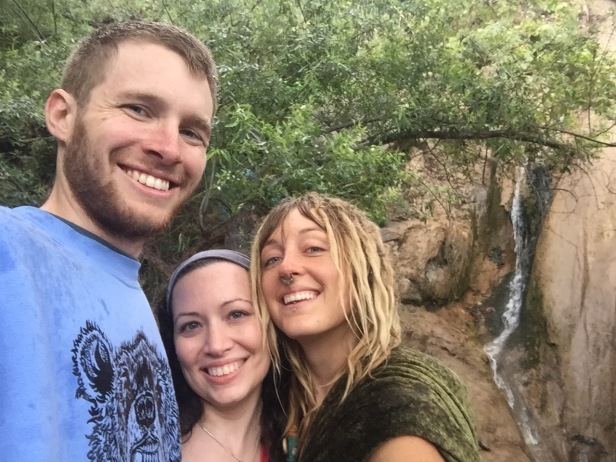 In order to get to the second and third waterfalls you had to switch to climbing mode over large rocks and muddy hills. This path isn’t very accessible if you have any mobility issues, but with the help of some ropes and large tree roots, you can make your way to the second and third falls. Things get pretty wet and slippery, so be sure to have proper climbing shoes (which I did not have) and prepare to get muddy.

But once you get to the main falls, the climb is totally worth it! 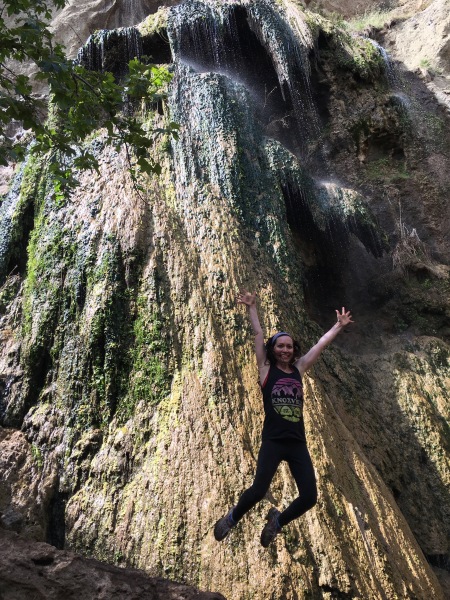 For the last few years Escondido Falls has been relatively dry due to the drought. But thanks to a wet winter and some rainy days leading up to the hike, the falls were flowing while we were there. 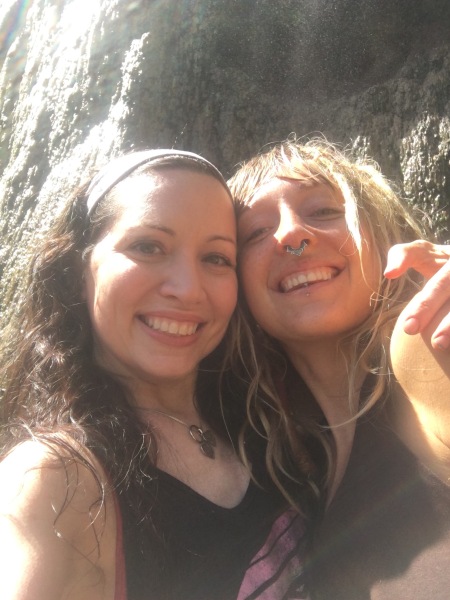 Samsara and I spent some time goofing around at the base of the falls, jumping off the rocks, and having fun on a rope swing as Justin took off exploring. 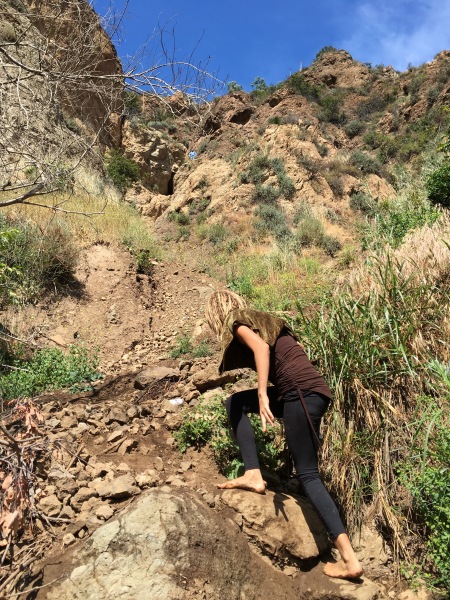 While we were engaged in frivolity, Justin had made his way to the top of the falls and beckoned for us to follow. 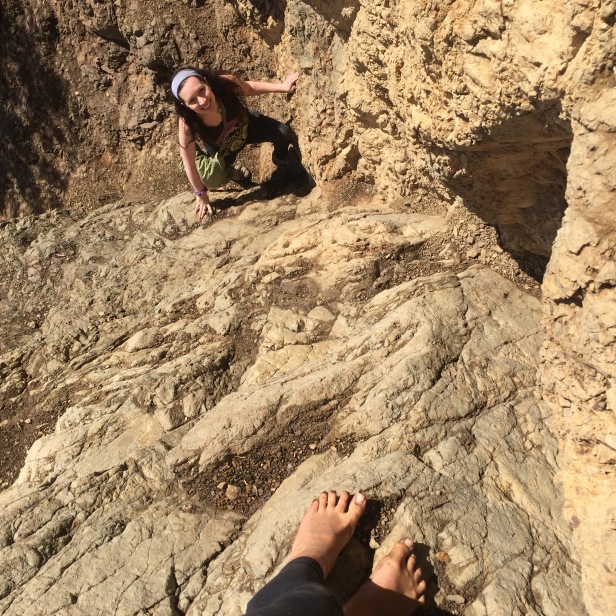 Please note that Samara is barefoot for this hike, because she is a badass.

Other than one session of indoor rock climbing a few years ago, this was my first attempt at climbing. It was also my first attempt at bouldering of any sort. The climb was one of the scariest and most dangerous things I have ever done. I do not recommend attempting to take the same route we did unless you are an experienced climber. There were several points along the way that I did not think I was going to make it (I even had to abandon my bag, as you can see above) and had I fallen, it would have been disastrous.

At the top of the most difficult part of the ascent was a small slot we had to climb through. The only way to get up its slick walls was to push your back up against one side and use your feet to climb up the other. Basically I applied the trick I learned watching cartoons as a kid to pull myself up.

Having my own personal cheering squad at the top definitely helped too.

But the view at the top made the climb and the fear completely worth it. We could see the waterfall, the canyon, and of course, the Pacific Ocean.

We all took time to enjoy the view and take our fair share of pictures. Part of me expected to end up in one of those “selfies taken right before disaster” click bait articles.

But instead, we had a lovely time relaxing and meditating at the precipice.

It rained on and off that day, just like it did during our trip to the Dominican rain forrest. That combined with the company and the complete lack of cell service resulted in one of the best and most relaxing days I’ve had since returning from my planned #funemployment. 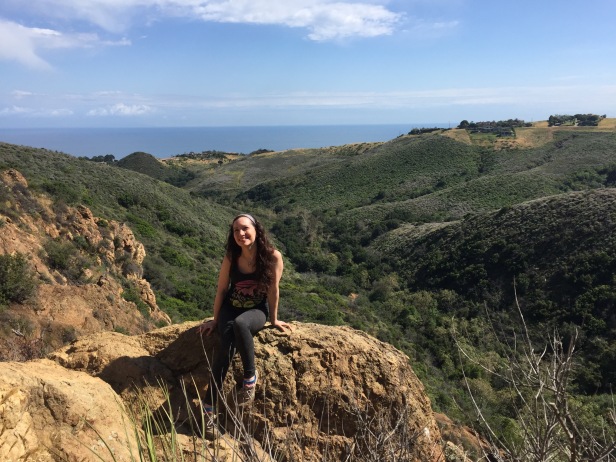 At one point while admiring the view we heard the sound of what sounded like a team of hikers coming up behind us. It was, however, a small rockslide crashing down the path we’d just climbed up.

I want to reiterate that you should not attempt to replicate my stupidity and that this climb is not meant for novices. My only saving grace was the flexibility gained from doing yoga 5 times a week for the last 4 months.

Of course we had to make our way to the very top of the falls for some photos. The water behind me is what was flowing over the top of the highest part of Escondido Falls.

It began to rain again right before we started our climb down. While the cool rain drops were refreshing, it also make the rocks extremely slippery and the dirt trail slick and muddy. I fell, more than once, and was utterly caked in mud. Fortunately, I only had some muddy clothes and a few scrapes and bruises to show for it. 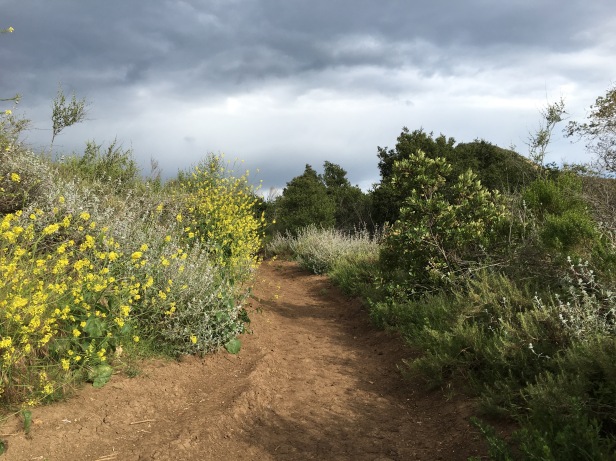 Overall, we could not have picked a better way to spend our day. It was just the adventure I needed.

The Escondido Canyon Trail and Waterfalls hike is free and the parking area is just off the majestic Pacific Coast Highway (which I hope to drive start to finish one day). If you visit on a Sunday, it is also just down the road from the fabulous Malibu Farmers Market where we got delicious fresh fruit and the best sprouted almonds I’ve ever had.