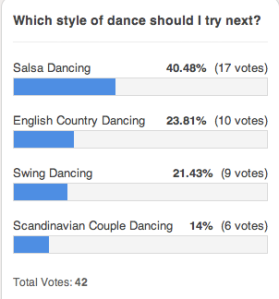 A few weeks ago I asked you to vote on which style of dance I would try next. Salsa won by a landslide. I had a deal for 2 dance lessons at SalsaKnox, so I went down to their studio to try it out. I’ve had friends accompany me on most of my recent adventures, but I decided to break out of my comfort zone a little and go this one alone.

I have discussed before that my dancing skills aren’t exactly developed. This isn’t due to a lack of rhythm, but due to an utter lack of coordination and not knowing my left foot from my right foot. Knowing which foot is which is vitally important in salsa. Because it is a partner dance, if you step with the wrong foot it throws everything off. 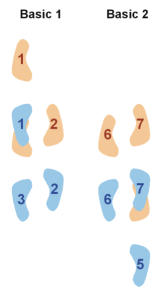 The basic salsa step for a woman looks something like this (in peach):

My lack of skills was very evident in my first session. I had to be shown the steps multiple times and receive a lot of corrections. Even when the instructors would take time to personally show me the steps, I still had problems. However, everyone was incredibly supportive. One fellow student told me not to worry, his first time he was terrible too. 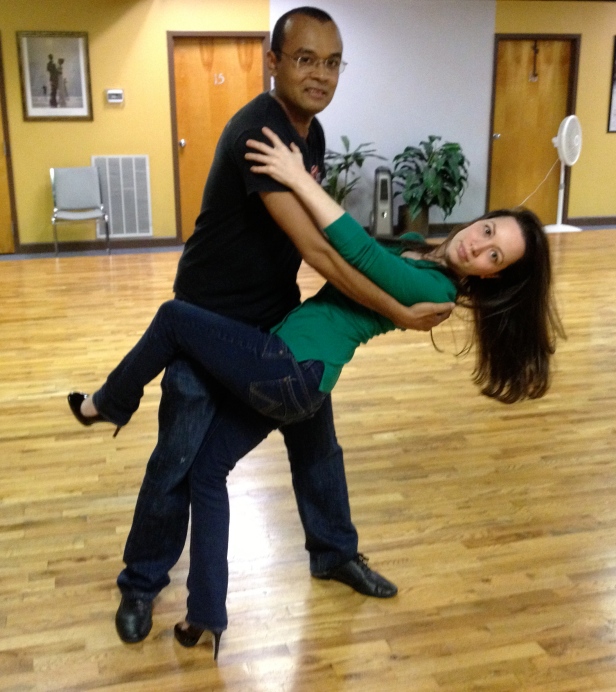 I am really glad I had a 2-class package deal. While I had a great deal of fun my first session, I am not sure I would have gone back, thinking it was a skill I would never master. But, since I already paid for the class and am incredibly frugal, I decided to go back for more.

This time I wanted to be more comfortable. For me, that meant wearing my 4-inch heels instead of the flats I wore to my first class. Wearing flats just throws off my sense of balance. This time we were lined up facing a giant mirror instead of a wall. At first, this made me self-conscious because I was worried that everyone would be watching me and judging me. Then I realized that everyone else there probably felt just as self-conscious at me and was only paying attention to themselves. So, I decided to use the mirror to my advantage and try to watch and correct my steps.

I must have picked up something through osmosis or in my sleep, because my skills increased significantly overnight. Don’t get me wrong, I was still an extreme novice, but I was able to figure out the moves and was no longer tripping over my own feet. This made me much more confident. In fact, I got “excellent” and “perfect” from the instructors Waldo and Jacqui. In addition to picking up some new dance moves like spinning and dipping, I learned how important it is to have a good leader when you are dancing. The better direction your partner gives you, the more confident you can be about your own steps. 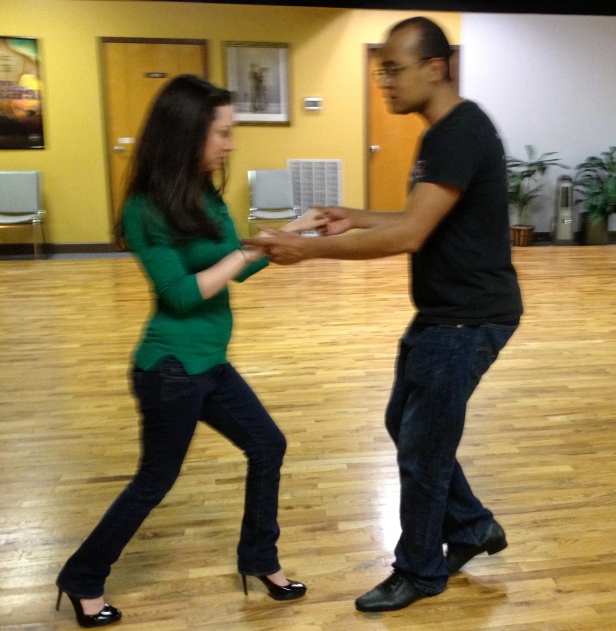 I absolutely loved salsa, and I learned not to give up easily on things I don’t master right away. The night after my second lesson I came home and purchased 15 more! I never thought I would be good at any style of dance, but who knows, stranger things have happened. This leaves only one question . . . who is going to take me dancing?

Meeting Martin Sheen — The Coolest Man Alive
While this isn’t really a New Thing, it’s the coolest thing that has happened to me all year so I had to share the story.

This week I had to go to Nashville for a meeting. I never get to see my friend Justin and wanted to spend time with him while I was in town. He had, however, an event to attend the night I arrived. He asked me if I wanted to join him, and I promptly accepted his invitation. The only thing he told me was that it was a fundraiser, what to wear, and when to be there. Thinking nothing else of it, I hopped in my car and made my 3-hour drive across the state.

When I got to the venue Justin explained that the Great Futures Gala was for the Boys & Girls Club of Middle Tennessee, and that his organization, the Phoenix Club of Nashville, was one of the sponsors. I noticed that the room was beautifully decorated and the presidential seal was on everything. I don’t really remember much of what happened next, but the conversation went something like this:

I should note that I am generally not star-struck and don’t care much about celebrities. However, Martin Sheen is on the super short list of people I truly admire and makes me turn into a puddle of goo. 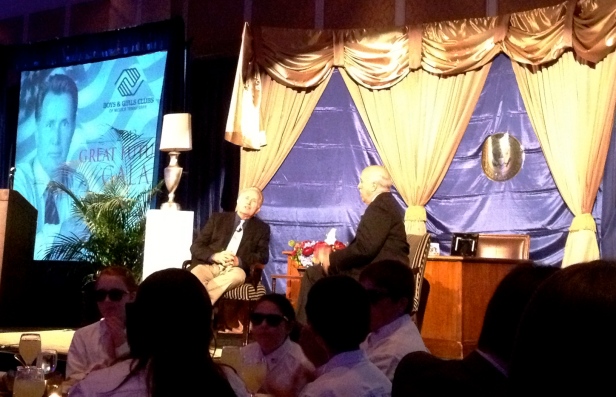 Of course, he did talk about the West Wing. (For those not familiar with it, it is the greatest show ever made. Yes, that is a matter of fact and not of opinion.) He told a story about when Allison Janney was interviewed about the show. The interviewer commented that it was a shame that the West Wing didn’t have a love story. She commented that the show did have a love story: Leo and the President. He said she was right, it was a love story and that they did love each other. Sheen then commented that John Spencer and he, as the more experienced actors, were the mom and dad on the set.

SPOILER ALERT for the non West Wing devotees. (What is wrong with you people? Just watch the show already, it’s on Netflix!) Sheen talked about how heartbreaking it was when John Spencer died and what a wonderful person he was. (I still can’t get through that episode without sobbing like a baby.) Apparently, Sen. Arnold Vinick (Alan Alda) was supposed to win the election and the show was going to keep going following the new presidency! However, when John Spencer died, they decided to call it a day and end with their 7th season and Matt Santos (Jimmy Smits) winning.

After the fundraiser we got to go to a private meet and greet with Sheen. I was so excited that I couldn’t speak. If you know me, you know this is a big deal. Sheen took the time to ask every one of us our name, look us in the eye, and shake our hands. He looked at our group and said, “look at these women . . . these women” and launched into a story about when he met Desmond Tutu. Apparently Desmond Tutu wanted to make a spontaneous visit to a tribe in Africa. The tribe thought that it was such an honor, but there was no way they would have things ready in time for his arrival. So the women stayed up all night, decorated, prepared food, and set everything up for his visit. When he arrived, it looked as though they had spent weeks preparing. When Desmond Tutu learned of what the women had done, he said, “if women aspire to be equal to men, they are not ambitious enough.” 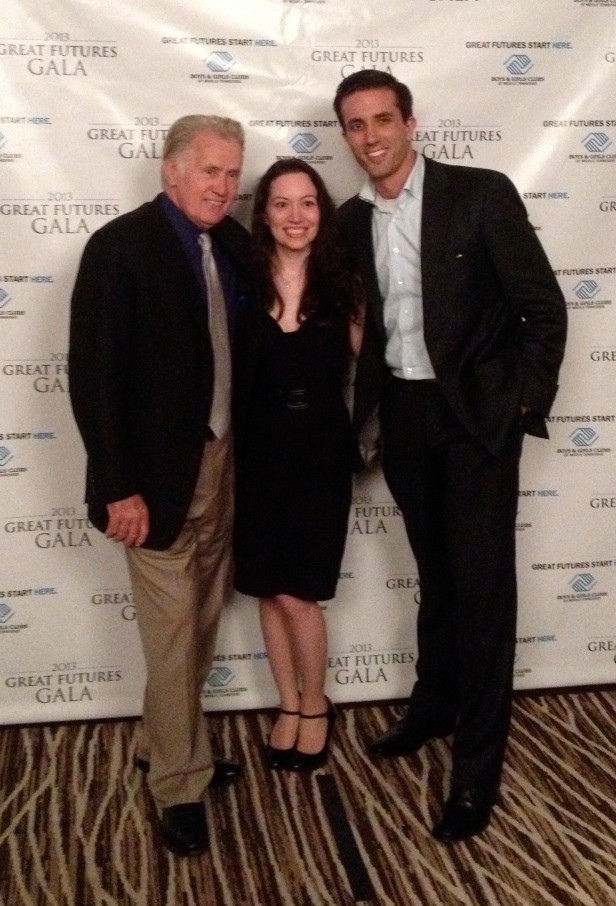 Meeting him and hearing him speak was absolutely everything I imagined it would be. He is as absolutely brilliant, eloquent, and charming as he seems, and is hands down the coolest person I have ever met.