When I was little, my mom would take me outside to lie in the driveway and stare at the stars. But, as kids tend to do, eventually I would get bored and want to go inside. Recently we got to experience the beauty of the Perseid Meteor Shower which was lauded as one of the best of the year. I used this as an excuse to throw a blanket and snacks in the car and head out to the country to watch some shooting stars.

We drove about 30 miles outside of Nashville, down the Natchez Trace Parkway, to an open grassy area. Team Green Adventures, a local outdoor group, planned an outing so fortunately there were a lot of people there camped out star gazing as well. This was comforting because having others there generally reduced my fear of being murdered on the side of the road in the middle of the night.

It really struck me just how bright the stars are when you get away from the city lights. I grew up away from town in an area that was half farm land and half rural neighborhoods, so I was always able to see a lot more twinkling lights in the sky than you could downtown. However, it was not until this experience that i actually got to see the Milky Way! I was blown away. The band of stars across the sky was phenomenal and incapable of being put into words. I can only imagine just how amazing it must look out in the desert, far away from civilization. 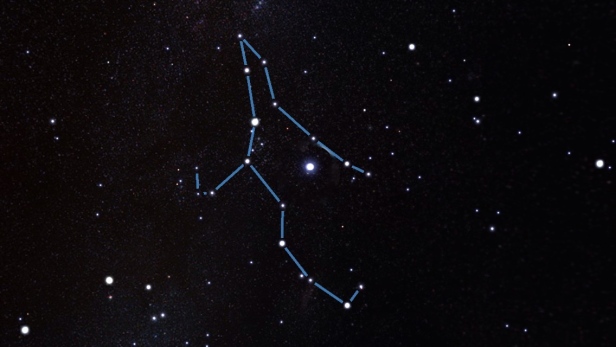 Back to the meteors. The shower gets its name from their galactic origin, the constellation Perseus. (See the outline above, which of course screams “dude carrying a sword, a shield, and Medusa’s head,” as depicted below.). We got to see some really beautiful meteors streak across the sky. However, I admit I missed several because I was busy running my mouth or looking in the wrong direction. The frequency of the meteors picked up as it got later, but we couldn’t stay as it was a Wednesday night and the law does not stop for celestial events.

Even though I failed to dress appropriately for the cool evening air, and thus spent most of the night attempting to wrap myself in the blanket I brought to lie on, it was a wonderful experience. I hope that this is just the beginning of my nocternal outdoor adventures. I’d love to really see the stars (with or without meteors) surrounded by nothingness or even one day even see the Aurora Borealis. I guess I should add that to the list.