As the temperature drops, the winter weather activities begin! Every year Gaylord Opryland features Ice, an indoor display of over two million pounds of ice sculptures hand-carved by 40 artisans. This year’s theme is Rudolph the Red-Nosed Reindeer. (See below for an example of the carvings and a friendly abominable snowman.) The attraction comes with all sorts of festivities including an ice slide, snow tubing, ice skating, and for the adults . . . an ice bar! 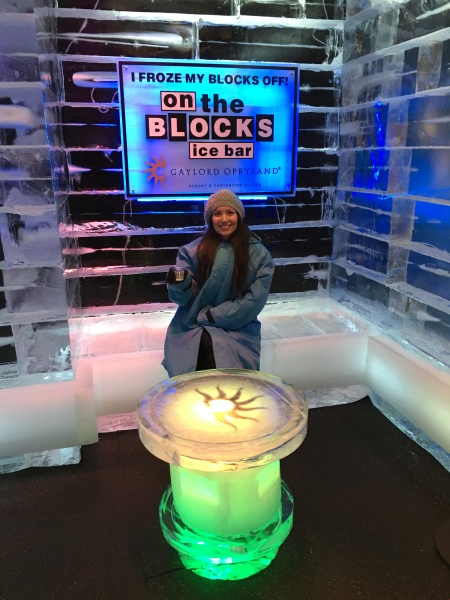 The ice bar, like the rest of the attraction, is only 9 degrees so we were given special parkas to put over our winter wear to keep us warm. (The cold air was a dark preview of the coming months.) The parkas helped a little, but it was still pretty icy in there. The cold wasn’t too bad as long as I wasn’t trying to take pictures. Every time I had to remove my gloves my fingers received an arctic blast.

There were 3 drinks to enjoy: A Goose Island Beer; the Jolly Mint featuring Jackson Morgan Southern Cream and Hangar One Vodka; and a Merry Margarita featuring Milagro Tequila. The Jolly Mint tasted like chocolate milk and the Merry Margarita was the first tequila drink I have ever liked. It was a nice revelation.

While the ice bar was a cool experience (see what I did there?), I think it may be better suited for places like Las Vegas where you are trying to escape the heat instead of just exchanging one level of cold for another. It also made me rethink wanting to stay in an ice hotel in Québec.

This visit was also a good lesson that my current winter clothes will not cut it this December as I take my very first skiing trip (and that I should perhaps get some of those iPhone friendly gloves). Stay tuned for that adventure in the coming weeks!

4 thoughts on “Chilling at an Ice Bar”