I like to add some variety to my adventures. Some weeks my New Thing can be done during a quiet evening at home. Other weeks it involves running and jumping off of a cliff. This week was the latter. I have had my eye on paragliding since I first tried hang gliding a few years ago. I significantly preferred that peaceful experience to the adrenaline (and terror) filled falls involved with my adventures in skydiving and bungee jumping. 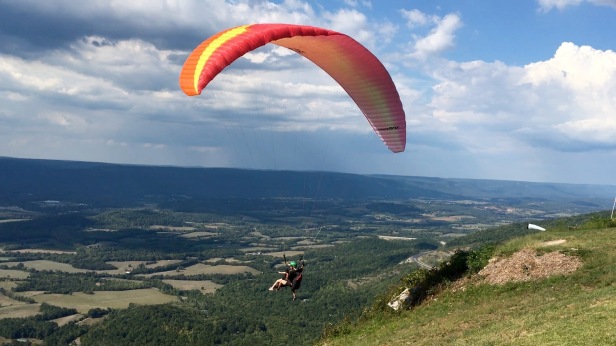 After an amazing weekend of watching Tennessee beat the Florida Gators (Go Vols), I decided to take a detour down to Dunlap, Tennessee on the way home. Dunlap boasts that it is the “Hang Gliding Capital of the East” and has served as the home to the East Coast Hang Gliding Championships. Well, I think it is a pretty good spot for paragliding too.

I met Dave Hanning and Brain Petersen of Flying Camp at the top of Henson Gap, 2,300 feet above the Sequatchie Valley. It was a typical fall day in Tennessee, and by that I mean it was almost 100 degrees outside. However, it felt nice and cool in the shade at the top of the mountain. This was a relief as it took a few hours of waiting for the right wind conditions to be able to launch. 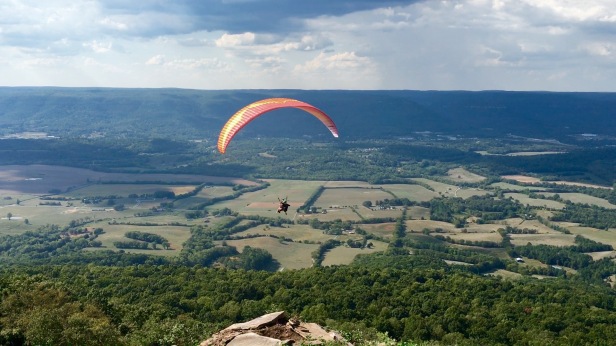 I did a tandem flight, which means I was tethered to Brian (thank goodness) while he controlled the glider (again, phew). The launching process is done into the wind. When it was finally time to go, we stood at the edge of the cliff, glider laid out on the ground behind us, waiting for the right wind to hit. When the right gust came along, Brian pulled the glider and it caught the air and inflated behind us as we started to run forward. 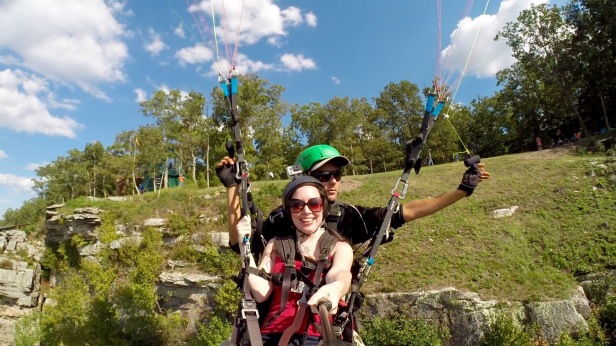 Within just a few steps the ground was no longer beneath our feet. It was what every kid who used a blanket as a “parachute” when jumping out of a tree house dreamed of. What? Was that just me? 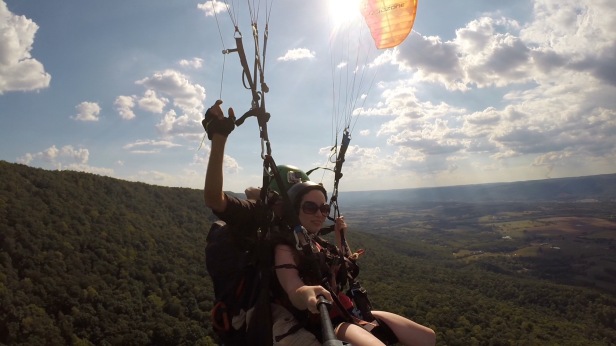 The flight lasted around 40 amazing minutes. We soared back and forth near the launch site in search of a thermal. A thermal is a rising column of air that can increase your altitude as high as the cloud base (science!). Once you hit a thermal you fly in a circle, trying to find the strongest part where the air is rising the fastest.

When we hit the thermal and started to rise the vario-altimeter started to beep signaling an altitude change. It sounded like the world was ending. Imagine the beeping sound a bomb makes in movies right before the hero defuses it. 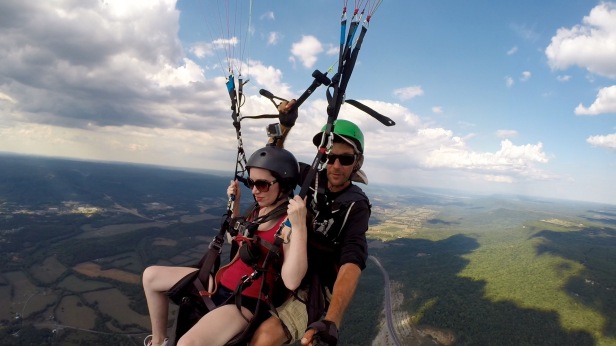 However, it actually was a sign that we were rising approximately 2,000 feet above the original launch location. In the picture below, you can see Henson Gap far beneath us on the left. The day was clear and beautiful and we could easily see 50 miles away to the nuclear plant in Watts Bar. Before we landed, Brian fit in a few aerobatics which added some extra excitement to an already thrilling ride.

Below is a video of our launch from the edge of the cliff:

And here is a video from the air as well as the landing:

Paragliding was a magical experience and one I certainly want to repeat. Although it took me a little while to settle my nerves, I felt completely safe and loved every minute of the ride. If you are looking for some adventure but sky diving or bungee jumping are a little too much for you to handle, then paragliding (or hang gliding) might be the right excursion for you.

One thought on “Paragliding Over the Sequatchie Valley”