This week I adopted a rescue fish. Thats right, a rescue fish. The owner didn’t want it anymore and was going to flush it. They had the fish for a year and just decided that they didn’t want it anymore. So, my friend Summer swooped in and saved it from a trip down the drain. Summer decided, since I spend so much time at work, that I could use some company and my office needed to be more homey.

When I told my friends that Summer gave me a fish, the first two questions were: “Alive or dead?” and “In a bowl?” These questions concerned me. Mainly because I wondered what it said about me that my friends would think that someone would hand me a dead fish.

At first was hesitant about having a fish. I feel responsible for a great deal of fish carnage as a child and I remember at least 3 backyard fish burials. Also, I feel bad about keeping it captive in a bowl. But its not like I can exactly release it back into the wild. Now that I am an adult, I feel I have as good of a chance of keeping it alive as anyone else, and at least I won’t be flushing it down the toilet.

I soon realized that I was a nervous fish mother. He wasn’t moving or eating much so I became concerned. A friend commented, “He’s a picky eater and aloof? Your fish sounds like a jerk.” Another suggested he was just being coy. However, my friend Candace pointed out that the poor guy was probably just cold. Despite keeping my office roughly the temperature of a tropical island, the water in the tank was quite chilly. So, I moved the tank to a warmer spot in my office and set up my space heater and warmed the little guy up.

The next day he was cold again. I realized that I couldn’t keep up this routine. After work I went to the pet store and spent more than I would like to admit on a larger tank, a heater, and other fish accessories. Setting up an aquarium is more of a process than you’d think. I spent at least 20 minutes just cleaning the rocks for the tank. But once I got it all set up the fish seemed a lot happier. 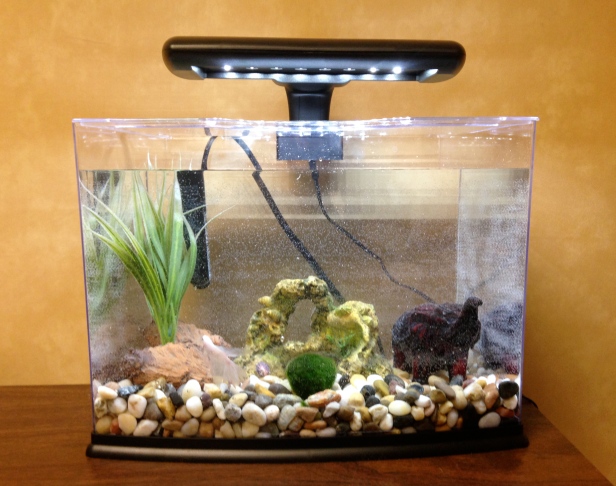 I decided to name my betta fish Peyton Manning, which I have discovered is a remarkably unpopular name for a fish. If anyone has tips on how to keep Peyton alive and happy in his new little super bowl, please let me know.

2 thoughts on “Adopting A Fish”