The ghost pepper, or the bhut jolokia, is insanely hot. In fact, it is one of the hottest peppers in the world. At 1 million Scoville heat units, the ghost pepper is 400 times hotter than Tabasco sauce. It is so hot it has been weaponized for use in pepper spray and it is even used as elephant repellent in India. Yes, elephant repellent. As a spice lover, this intrigued me. I have always loved spicy food and I am a firm believer that if I am not physically uncomfortable eating then the food isn’t hot enough. 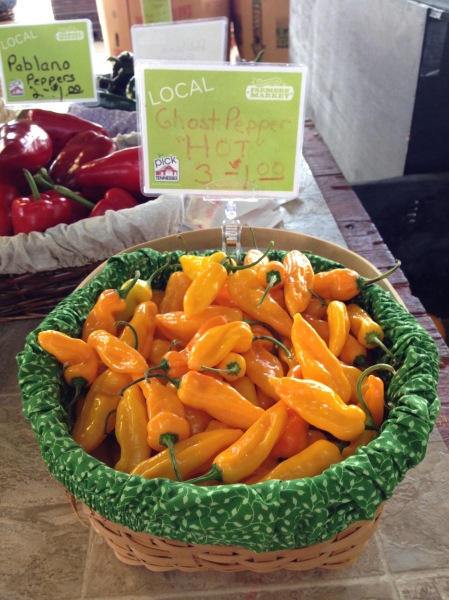 This weekend, while visiting Nashville’s farmer’s market, I discovered Swafford Farms selling a variety of fresh peppers with beautiful ghost peppers front and center. I remembered I saved a ghost pepper recipe for just such an occasion and pulled it up on my phone to see what else I needed.

Fortunately, Fresh and Local Produce at the farmer’s market was able to provide me with the rest of the vegetables. The recipe called for:

I prepared all of the ingredients and saved the ghost peppers for last. Before I chopped them I had to taste one for myself.

At first, it tasted like every other pepper I’d had and was a pretty mellow experience. Then, I bit into the inside of the pepper and and one of the seeds. The heat had a delayed reaction. Initially there was nothing, and then the heat slowly took over my entire mouth. It was not nearly as bad as I excepted, but I cannot deny that the peppers had some serious heat. No tears were elicited, but I did turn to a large glass of milk for relief.

Here is your science tip for the day boys and girls: The chemical that causes the heat in peppers (capsaicin) is not water soluble so drinking a glass of ice water will not soothe your tongue. In fact, water will only spread the heat. Instead, you need something that will break down the capsaicin. Casein, the protein in milk, helps break the bonds capsaicin forms on nerve receptors.

Bonus science tip: Vegetable oils will also break down the capsaicin. If you deal with peppers with your bare hands (which is not advisable) be sure to wash your hands with oil a few times. Soap and water alone will not do the trick and will leave you pretty miserable if you rub your eyes with even trace amounts of the capsaicin still on your fingers. 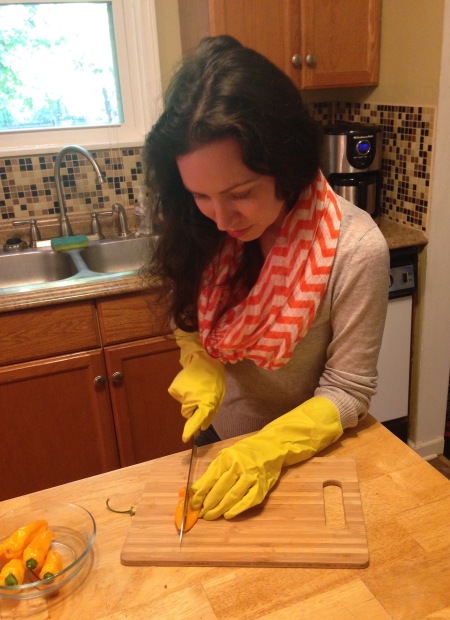 When I began cutting the peppers I followed the rules and used gloves to protect my hands. 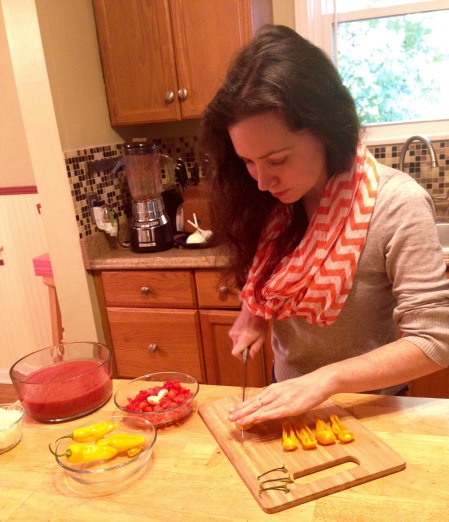 However, I quickly realized that the gloves made dicing nearly impossible and decided to risk it. The peppers definitely made my fingers burn a little, and even a day later, after washing my hands with oil several times, I have not attempted to take out my contacts. Ghost peppers are powerful stuff.

Finally, it was time to combine all of the ingredients to make the salsa.

You just throw everything in a pot, bring it to a boil, and then reduce the heat and simmer for 20 minutes.

The salsa made the house smell amazing. The fragrance still hung in the air when I got home from work the following day.

Safety tip: Do not put your face over the pot while you are cooking. It is essentially steamy pepper spray. (Fortunately, I did not have to learn this the hard way.)

I varied the recipe slightly. The recipe calls for the ghost pepper seeds to be removed. This is because the capsaicin is very prominent in the pepper’s seeds. I, however, love spice so I left them in. The recipe also called for the salsa to be blended until it becomes a smooth sauce, but I preferred to to be chunky so I could enjoy it with chips. If I were to make it again, I would definitely add more ghost peppers, more bell peppers, chunkier tomatoes, a heavy dose of cilantro, and a little bit of chopped garlic.

The salsa had some kick, but after the first bite (captured above) I got pretty used to it. In fact, I haven’t been able to stop eating it. My friend Tina, however, had a different reaction. She took one bite, shouted “THAT IS UNACCEPTABLE,” and then ran for a drink to cool her mouth.

So, in the end, the ghost pepper experiment went well and just confirmed my love of all things spicy. Plus, now that I know that making salsa is a simple as a quick trip to the farmer’s market, I am not sure I’ll ever buy it from the store again.