Last weekend I visited Knoxville for an alumni meeting at my law school. I hadn’t seen my friend Amy since I left town so I wanted to have a new adventure with her while I was there. Amy previously accompanied me belly dancing, indoor rock climbing, and hanging upside down from ropes. First, we wanted to go hang gliding but the timing didn’t work out. Next, we thought about hiking in the Great Smoky Mountains National Park but the government has apparently closed nature. Finally, Amy suggested horseback riding. 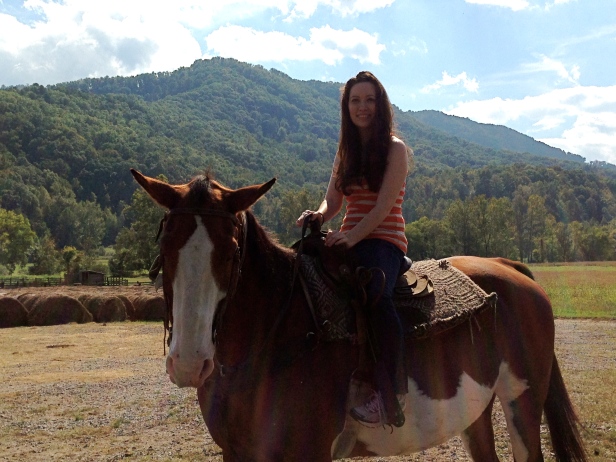 We went to Walden Creek Stables, which is just outside of Pigeon Forge. It was my first time passing though Pigeon Forge, which is like a hillbilly version of Disney World, and I have determined that it is either the tackiest or most amazing place on Earth. I am undecided as to which; further investigation is needed.

Walden Creek Stables is 500 acres of farmland and mountain trails. We went on a 60-minute ride though creeks and the hills of East Tennessee. I rode Quincy, a gorgeous horse with one blue eye and one brown. He was extremely gentle, probably because he was trained as a child’s horse. That said, he took every opportunity he could to sample the grass.

It was interesting learning how to control him. Getting him to go faster, slower, turn, etc. However, I felt really weird asking such a majestic creature to both carry me around and do it the exact way I wanted it. It was a foreign concept for me. Sarah, our guide, told us about how every horse had their own personality, and they determined the order we went down the trail based on their personalities. Some were natural leaders and would guide everyone down the trail, others were more ornery and would kick so they had to be place in the back.

My favorite part was watching the leaves fall and going through the creeks. There was something very relaxing about it and it made me think about what it was like when the only way to get around was via horseback.

Over all, it was a really fun ride. Maybe if Eric Berry went for a ride here it would help him get over his eqinophobia.