After years of saying that I wanted to learn how to play golf, I thought I’d finally take the first step towards doing something about it. On Saturday I made a trip to my first driving range. It was, like every other July day in Tennessee, approximately 100 degrees. However, it was only 50% humidity, which, believe it or not, made the heat pretty bearable compared to the rest of the summer.

A friend took me to the McCabe Golf Course in Nashville to hit a few buckets of balls. It was my first time swinging a club, so the morning started out a little slow. I would take a swing and, if I came into contact with the ball at all, it would only skip a few feet. However, I tried to pay attention to what the golfers were doing successfully and then adjust my swing accordingly. The first improvement came when I aimed my club slightly below the ball rather than directly at the center of it. On my first attempt with my new technique, I actually got the ball in the air and to move a decent distance. The instant improvement was extremely gratifying. 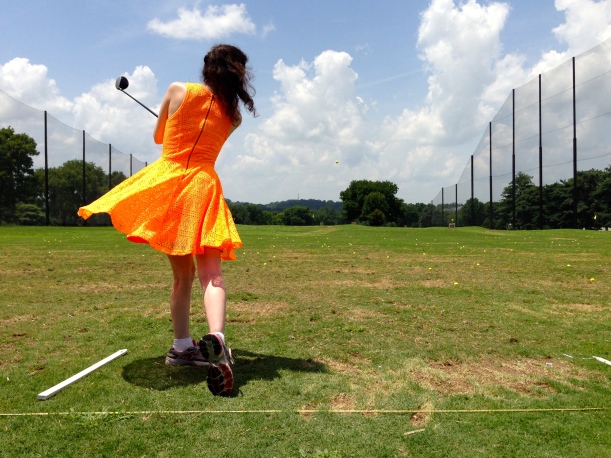 There were a few occurrences throughout the day that gave me good perspective that, (1) everyone was once a beginner, and (2) even experienced golfers have occasional issues. First, about halfway through the morning I sliced my ball toward a woman two hitting stations over. I gave her a “I’m sorry” look, to which she responded, “The first time I ever played I chipped the ball and it popped up and hit the guy next to me in the butt.” Her husband chimed in, “we call that a butt shot.” Second, a gentleman at the other end of the tee somehow managed to not only to send his ball down the range, but threw his club along with it. He called out “fore” as he trotted out 50 yards to retrieve his driver. I’m not sure if that was the result of a really good hit or a really bad one. Individual stories aside, there were just as many balls within 20 feet of the tee as there were further down the range, a good lesson that nobody has a perfect day. 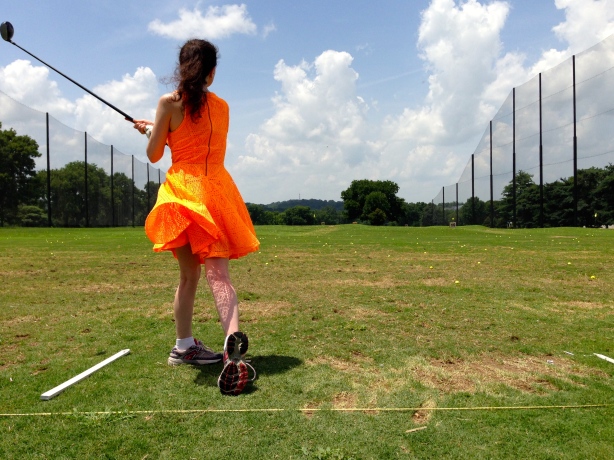 My other big improvement came when I loosened up my grip a bit after trying to replicate another nearby golfer. Looking at images online of the proper golf stance afterward, I am nearly certain that I was pretty far off of what I was supposed to be doing, but it had a very positive affect on the length of my drive. Suddenly, I was consistently hitting the ball 100-120 yards down the range. I was thrilled. I couldn’t jump up and down and scream like the first time I hit a baseball, so we silently celebrated instead. (See photographic evidence below of me actually hitting a ball.) 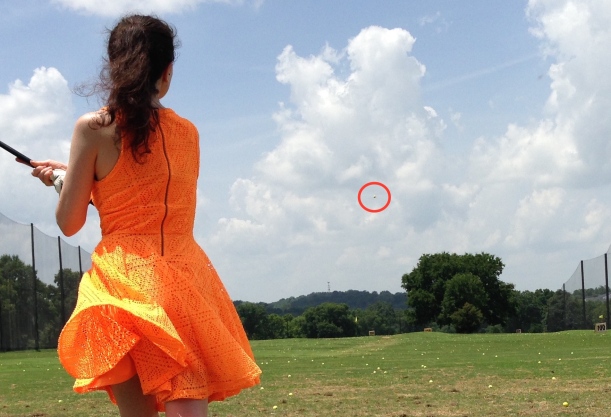 We spent an hour at the driving range going through buckets of balls. I had such a good time that later that evening we went to a sporting goods store to check out Sara-sized sets of golf clubs and I already have plans to head back to the driving range this weekend. Hopefully I’ll stay interested and can learn the proper techniques to really improve my swing. While I definitely want to take lessons and work up to playing a round of golf, I loved that the only person I was competing with on the driving range was myself. When that is the case, I can never lose.

One thought on “A Trip to the Driving Range”