I know what you are thinking. Am I secretly 86 years old and I didn’t tell you? Sort of. I’ve obviously played bingo before. I’m not that sheltered. I just haven’t played it as an adult.

We went to a local bar called The Stone Fox. I wish I took pictures of the decor, the walls were covered with kitsch including a portrait of Tom Selleck and his magnificent mustache. When I thought about bingo night, I expected a mostly empty smokey dive bar filled with people who were at a very sad crossroads in life. However, when I got there the place was packed full of hipsters ready for a game of bingo. Apparently, I’ve been missing out on the hot thing to do in town. I arrived a few minutes early and a guy at the next table (who looked like Jason Lee circa 1999) invited me to join their group if I was going to be playing alone. I was meeting someone there, but it reminded me just how friendly Nashville is.

While it was a lot of fun, I realized that bingo isn’t really a great game if you want to have a conversation. I kept missing the calls and had no clue what was going on most of the night. 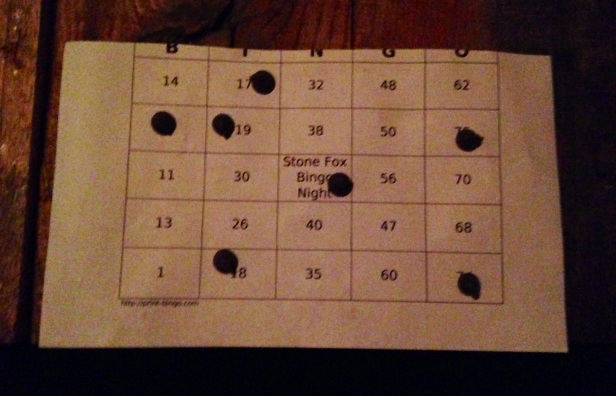 The Jason Lee look-alike commented that “bingo reminds you that you are not special at all.” I think that’s pretty accurate.