If you aren’t familiar with Rocky Horror Picture Show, you may have been living under a rock for the past 40 years. Rocky Horror is the story of a young couple, Janet (Susan Sarandon) and Brad (Barry Bostwick), who get a flat tire in the middle of nowhere. They go to a nearby castle (because apparently there were castles everywhere in the US in 1975) where they ask to use a phone to call for help. There they meet bizarre characters, including Dr. Frank N. Furter (the amazing Tim Curry), a mad scientist who introduces himself as a sweet transvestite from transexual Transylvania.

Rocky Horror was initially a flop in theaters, but it quickly became a cult classic among fans. With Tim Curry in fishnets and pearls, how could it not be? Part of what propelled it to legendary status was midnight showings where fans came dressed as their favorite characters, brought props, and often times acted out the scenes along with the movie.

The Belcourt Theatre in Nashville shows Rocky Horror every Halloween and it sells out weeks in advance. Luckily, I remembered to grab tickets about a month early this year. Not only does the Belcourt put on midnight showings, but they also featured Little Morals, a live cast acting out the movie beneath the screen. The theater also sold prop bags for audience participation in case you forgot your own or didn’t know what to bring. 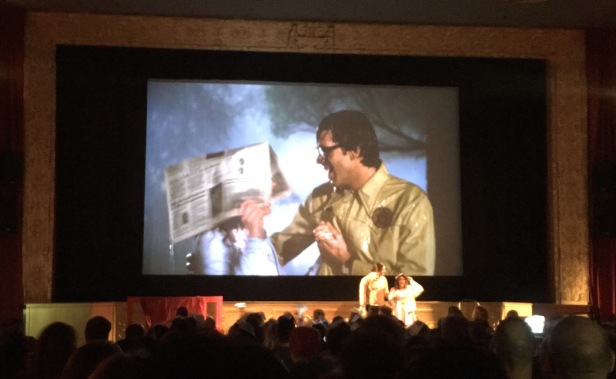 The evening started with identifying who the first timers were. If you had not seen Rocky Horror, which seemed to be about a third of the audience, you were marked with a red “v” (for virgin) and given a red ballon (in order to pop your “cherry”). Fortunately, I was first exposed to the movie in high school so I got to sit that part out.

Once the movie began, so did the jokes, screaming, dancing, and throwing of things (see the roll of toilet paper flying through the air above). There were some rules though: no glitter, confetti, or rice; no squirt guns; no lighters, matches, candles, or other open flames; no throwing objects or food at movie screen; no silly string; and absolutely no one under 18. This was the first movie I attended that came with its own set of rules.

This is not a PC performance. In addition to topical and overtly sexual running jokes shouted by the MC throughout (Trump jokes were the most prevalent and came in at a total of 6 for the evening), there are some universal standards at Rocky Horror viewings. For example, every time you hear the name “Janet” the audience shouts “slut,” every time Brad says his name the audience shouts “a**hole,” and of course, the entire crowd rises to their feet to dance the Time Warp. 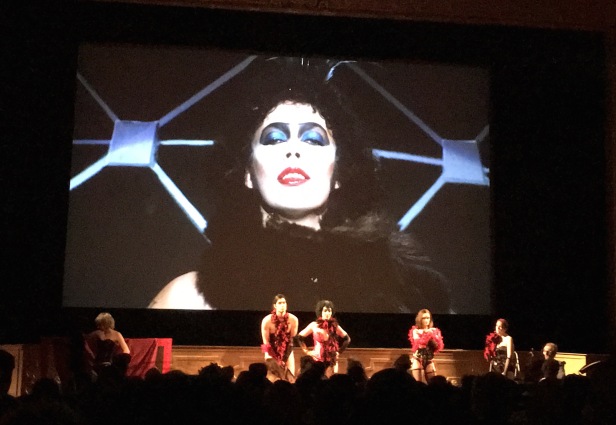 As for the props, it varies by city and what each theater allows. Our bags came with newspapers, glow bracelets, rubber gloves, noise makers, toilet paper, party hats, bells, and playing cards. There are certain points in the movie during which the props are used. For example, when Janet and Brad get caught in the rain, everyone covers their heads with their own newspaper. When Dr. Scott enters the lab, Brad cries out “Great Scott!” everyone tosses rolls of toilet paper across the theater. When Dr. Frank N. Furter puts on his party hat the audience puts on their hats as well.

Initially, I did not plan for my evening with Rocky Horror to be a post for the blog. However, it was such a unique experience that it definitely qualifies as a New Thing. In fact, my companion for the evening, who had never seen Rocky Horror Picture Show, described it as “the most surreal experience” of his life. I hope to now join the masses of others who make the Rocky Horror midnight movie an annual tradition. Until then, I’ll be waiting with antici–pation until next Halloween when we can all do the Time Warp again!